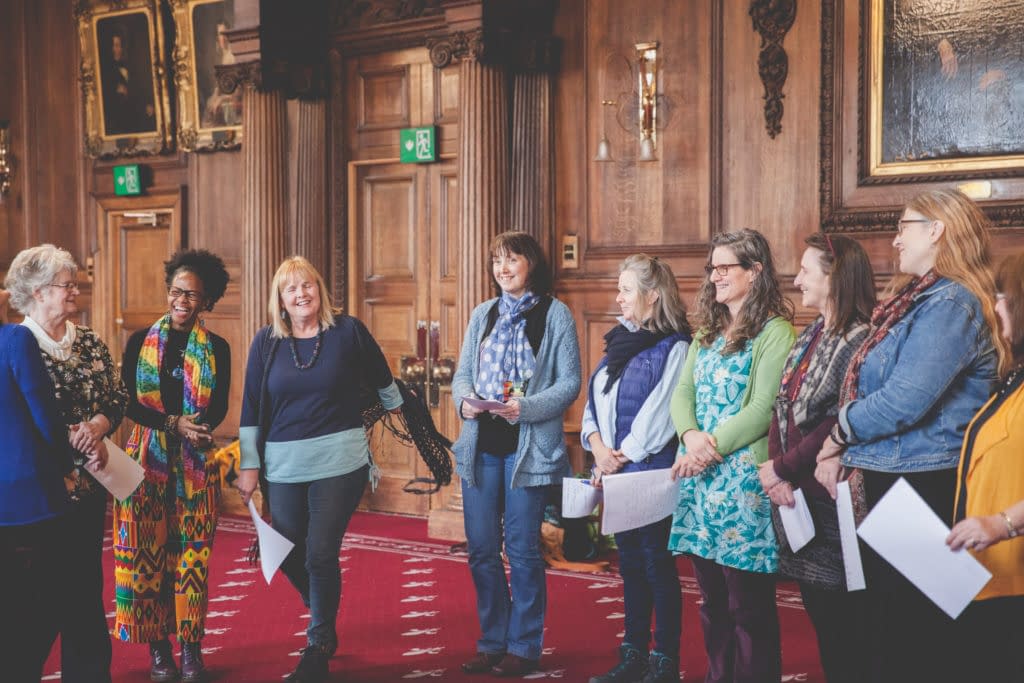 Lancaster’s The Growing Club CIC has launched a short film as part of the Lancashire Innovation Festival. Voices from the Frontline is a thought-provoking film by women aged 50-plus – as business owners and employees – on their hidden skills and daily triumphs.

Just before lockdown hit, a group of women aged 50-plus came together to work with The Growing Club CIC for two days. This project was funded by Rosa, and aimed to share the women’s experiences, reflect on their life journey, skills and create a short film. The team comprised of Alison Cahn and Frances Bowen of Forgebank Films, photographer Ginny Koppenhol and group workers Jacqueline Harris and Jane Binnion.

The Growing Club CIC is a social enterprise based in Lancaster, designing and delivering employment and enterprise training and support, especially for women, from skills to startup, to sustainable business growth training.

The Pensions Act (2011) changed the age range for women receiving a pension from 60 to 66. This is a critical issue that has caused much debate, along with social and financial difficulties. Women have rich skills and experience, they feel more confident, and they want to be able to continue to work and share their knowledge and expertise.

Conversely, societal attitudes towards older women have not changed. This means many more women have ended up unemployed, or are expected to take on low-paid insecure work. This has resulted with more women in poverty. The week before the film launch, Prospect Union shared research that showed there is a 37.9% difference in retirement pay between men and women. Much of this is due to the fact that many women become unpaid carers at some point in their life and career.

The women explored issues surrounding this age bracket, with the group identifying commonalities in themes. These centred around: caring responsibilities and support, being economically viable, the scant information available for women moving from being a stay-at-home parent into work and business, opportunities and networking being made available, easy and visible for women over 50.

Women who took part in the filming spoke on the issues they have faced:

“If I applied for a job at my age, I wouldn’t get looked at because if you’re looking at IT jobs for women, they’re within a certain age band…I would like to contribute more to society. I do some voluntary work, but I just feel as though I’m not at the end of my working life yet.”

“There’s such a wealth of knowledge, experience, that we can share with people who are younger than us.”

“I want to teach children because there’s a generation gap in education, especially in arts and crafts. There have been so many cuts and people just don’t learn anymore. I think it’s important. In my job, I organise workshops to try and pass on those lost skills.”

Voices from The Frontline film was launched in October 2021 at The Dukes Cinema in Lancaster, during the Lancashire Innovation Festival. The festival aimed to showcase social innovation as the design and implementation of new solutions that demonstrate conceptual, process, product, or organisational change. Ultimately, this aims to improve the welfare and wellbeing of individuals and communities.

“We wanted to make the film to explore the issues of female eldership, which is valued in some societies and not others, and to highlight the issue of wasted skills and talent. This is even more relevant now with current skills shortages”

At the film launch, Jacqueline Harris led a discussion in small groups, enabling all to take a new look at how the social issues raised could be addressed. Feedback from the film launch included emotive words such as “powerful,” “enlightening” and “humbling”.

People also were asked what they might do differently as a result of seeing the film and participating in the discussion. Examples of comments received were: “I will value older people’s back story”, and around learning to ask questions differently on the values and many roles that older women have played, and the resulting experience they can bring to the table. Members of the audience were alarmed at how so much skill and experience is simply wasted as a nation. And additionally, the lost opportunities there are when employers hold a limiting mindset as to what skills are valuable.

Many of the older women present at the launch reported that they felt more confident and hopeful. They stated they will approach things differently going forward, recognising what skills they have developed, rather than writing themselves off.

by Claire Stephenson with No Comment NewsTraining CoursesWomen in Business

Jane Binnion talks about a Pay-It-Forward grant scheme operating for Women in Business in Lancashire, to help startups & existing businesses.

Rebecca Young hopes to set up a web design business, with the aim of supporting the work of individuals, small businesses, and non-profit organisations, particularly those in the arts and culture sector.

by Claire Stephenson with No Comment NewsWomen in Business

Nicola Combe talks about the weekly face-to-face drop-in support that she hosts for The Growing Club CIC on Thursdays, and how it can benefit you, your business and learning.

by Claire Stephenson with No Comment NewsTraining CoursesWomen in Business

by Claire Stephenson with No Comment NewsWellbeingWomen in Business

The Growing Club is thrilled to have been chosen as one of ten changemakers in the UK and Ireland, to collaborate on a Changemakers programme, with a committed £1.5 million over three years to support social enterprises that have created bold and innovative ideas to improve resilience and protect against financial life shocks, such as illness, divorce or change in income.

by Claire Stephenson with No Comment WellbeingWomen in Business

Learn and understand how to make the most of working alongside your hormones to maximise your energy and business.

The Growing Club CIC’s founding director, Jane Binnion, talks about taking time to breathe and adjust to the changes of the last 18 months.

Rachel Gristwood provides proofreading services, searching out spelling mistakes, grammar that needs to be improved, along with punctuation and formatting errors.

Claire is an Accredited Public Relations Practitioner and runs a PR and communications consultancy, working on a global basis. She focuses on ethical communications, helping the third sector, CICs, environmental organisations and small businesses, to tell their story with power and authenticity.

Kelly Akister is a qualified teacher, specialising in advanced early years education. She’s been running her own business – Reading Fairy Lancaster – for over a year now.

A case study on Hayley Cooper, who runs her own lettings and property management company, managing a portfolio of properties in and around Lancaster and Morecambe. Hayley is on the Bloom and Grow course with The Growing Club CIC.